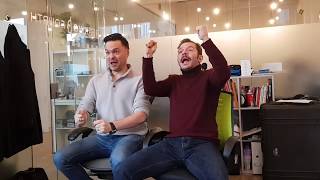 BRO BOTS: BEHIND THE SCENES

For the past few months, we’ve been hard at work creating Bro Bots, our first animated VR series. Working in a nascent industry means that we spend a lot of time thinking about the future: what will be different, but also the unexpected patterns and repetitions of history. Since it's only a matter of time until robots rule over us all, we decided that the smart move was to create a show that would appeal to them. Bro Bots is a cop show set in a futuristic New York City, inspi